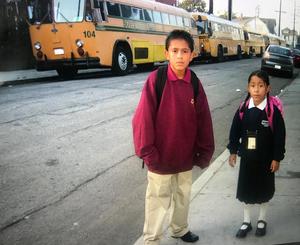 "This once-in-a-lifetime opportunity will also allow us to conduct independent travel to our birthplace to conduct ethnographic research on our family origins and connect to our roots."

Edgar and his sister, America, are raising money to participate in the Summer 2021 California-Mexico Dreamers Study Abroad Program, giving them a unique opportunity to conduct independent travel and ethnographic research on their family origins and to visit their place of birth.

Edgar was eight and America was two when their mother brought them to the United States. Edgar enrolled as a 4th grader at Downtown Value School, and America followed in his footsteps when she was old enough to enter kindergarten.

In 2012, Deferred Action for Childhood Arrivals (DACA) was implemented. The DACA program allowed some individuals who had been brought to the country as children to receive a renewable two-year period of deferred action from deportation and become eligible for work and education permits.

Edgar received DACA status and graduated from Central City Value High School that same year. He also received admission to University of California, Santa Barbara. His mom’s work had paid off, and Edgar’s experience was emblematic of her sacrifice. Edgar had become the first person in his family to graduate from high school and go to college. For the first time during his senior year of high school, Edgar didn’t feel like an imposter.

“Before DACA came,” he explained, “there were some moments when I felt like an outcast, like I wasn’t enough. But when I received DACA I thought, ‘Maybe I’m not an immigrant anymore. I feel like a realAmerican. I have a social security card, a driver’s license, and I’m no longer an outsider. Now I can be a productive member of society.’”

But Edgar’s college experience brought additional layers of challenge and difficulty. He felt out of place surrounded by students who came from privileged homes; he realized he was different when fellow students spent summers traveling while he joined his parents in LA’s garment district to make extra money to pay for his schooling; and he began to see the experience of his family in a larger context.

“I began to realize there was a difference between assimilation and acculturation,” Edgar explained. “My Chicano Studies courses in college began to shine a light on where I came from, and I discovered these experiences weren’t unique to my family, but were experienced by Mexicans throughout history.”

Edgar and America adapted. Encouraged by his parents’ reminder that he “had to try hard because life ishard,” Edgar graduated from UCSB in 2016, returned to his alma mater, and taught English Language Development to students with similar life experiences. America is set to graduate from the University California San Diego this year, join Teach for America, and return to her community to teach and give back. Both are now very proud of being American. And they are proud of being Mexican, too.

“Ever since I can remember, my sister and I spent our weekends at the sewing factory with my parents,” Edgar remembers. “They can make anything from scratch, but because they don’t have a social security number, they can’t become designers. My mom is like generations of immigrants who are kept from personal success, but have the mentality that as long as their children thrive, they would be fine. That’s strength. Understanding my parents’ experience makes me understand why and how I wanted to become a leader. And part of understanding all of this is returning home.”

The California-Mexico Dreamers Study Abroad Program is a once-in-a-lifetime opportunity for Edgar and America. However, it poses one big risk: the possibility of not being allowed back into the country. While it is certainly a frightening leap of faith, it does not compare to the constant uncertainty they have endured while DACA remained only a temporary relief program.

After exploring their birthplace in Mexico, Edgar and America  plan to return home and share their stories and provide immigration resources to the many Value Schools’ families in need of support. They are also developing a professional development series that will help parents, students and teachers of all four Value Schools better understand the experience of young people when coming to the United States.

Read more about Edgar and America’s travels this summer here.